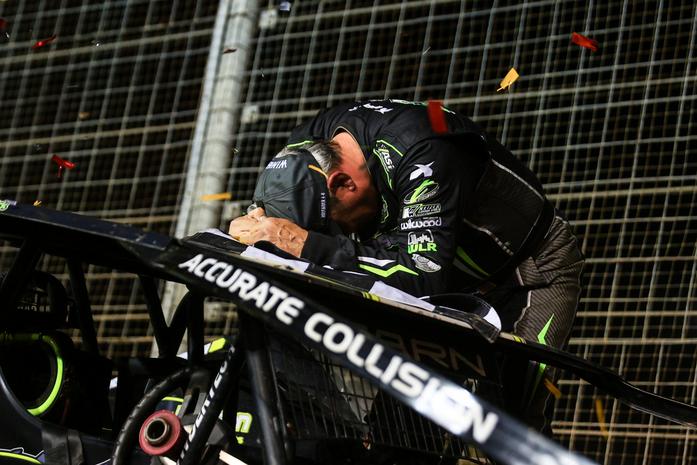 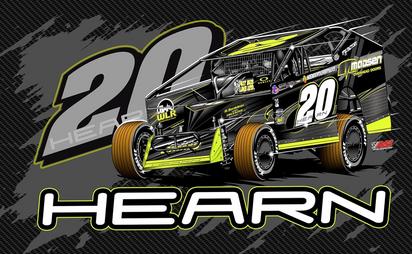 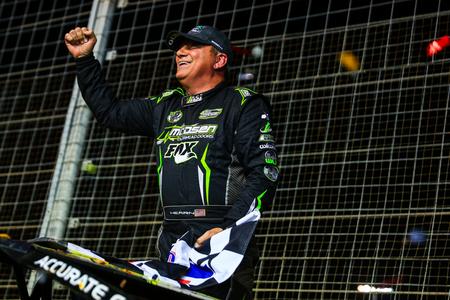 CONCORD, NC – Brett Hearn looked to the sea of phone lights and emphatic fans in near shock. His head fell to the roof of his #20 Big Block Modified and stayed there for a couple of seconds, fists clinched. The Hall of Famer has more than 100 Super DIRTcar Series win, more than 400 DIRTcar sanctioned wins and more than 900 dirt Modified wins, yet on Saturday night at The Dirt Track at Charlotte for the NGK NTK World Finals, he looked like he’d just won his first.

The legend of the sport, who has been racing a limited schedule for the last few years – led from green to checkered to pick up his first Super DIRTcar Series victory since 2018 – also his 450th DIRTcar win and 920th dirt Modified win.

“I never really envisioned being back in Victory Lane because I was so far out of the seat,” Hearn said. “If I can’t see myself in Victory Lane, I’ll never get there. I came into tonight visualizing myself on this stage and that’s what happened.”

The moment was also surrounded by multiple page-turning storylines. Matt Sheppard claimed his eighth Series title the same night, surpassing Hearn for the most championships all-time and finished second behind his hero at the end of the 30-lap Feature.

“He’s the greatest of all time,” Sheppard said. “He came down to whoop on us at Charlotte. He could pick no better time to retire!”

After drawing the SRI Performance Pole Award for the second time in two nights, totaling $1,000 in winnings, Hearn kept his black and yellow #20 Madsen Motorsports Big Block wide enough to hold off charges from Peter Britten, Sheppard and Rocky Warner.

Hearn, from Sussex, NJ, started from the pole position in both Friday and Saturday night Features but round two had the results he wanted.

“We just got caught with the wrong tires last night,” Hearn said. “We didn’t anticipate the amount of tire-eat we had and flat out made a bad choice. The car off the trailer was great. The key here is to come out fast and Time Trial well.

Hearn timed quickest his qualifying group running a 17.210 second lap. He also holds the Big Block lap record at The Dirt Track at Charlotte and is now in sole possession of the all-time wins record at the Concord, NC track with five.

“When you do that [Time Trial well], it makes everything flow better,” Hearn said. “The fact that we drew the pole and had two chances from the point, it would have been a disappointment not to come out with a win. We won our Heat Race tonight and we knew if we were able to keep the tires under us in the Feature we’d be good.”